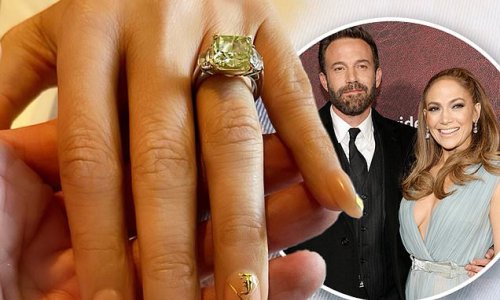 Jennifer Lopez’s Green Diamond Engagement Ring is the talk of the town.

Jennifer Lopez recently stunned the globe. It’s not the first time she’s amazed the world! This time, it isn’t because of her new album or her outstanding acting. Instead, her green engagement ring was the star of the show!

Jen successfully leveraged the highly publicized personal moment to promote her, “On the Jlo” newsletter, in which she announced the engagement news, and released a video of herself alongside her newest forever costar – the unbelievably, massive green diamond engagement ring that Ben Affleck proposed with the second time around.

A Little About Green Diamonds

Translucent, black, and brown diamonds are more frequently found. Other hues are far more uncommon. For example, Bennifer’s original engagement ring included a pink diamond, which was even more uncommon than the green one she presently wears. Blue is also another uncommon and particularly prized diamond color. For example, you may have heard of the Hope Diamond, a well-known blue diamond.

Structural flaws can create green diamonds and are most usually caused by radiation damage. While every hue is mirrored in a clear diamond, radiation from adjacent uranium or thorium ore, can contact a diamond’s carbon layout and lead light to reflect off it differently, which gives it a green color.

The Natural Green Color of a Diamond

The hue of many green diamonds is limited to a tiny layer on the raw stone’s surface. Therefore, the polished diamond’s shape and trim must be meticulously planned and constructed to preserve as much of the natural color as possible. Even if the faceting only leaves a strip of green color around the girdle and a tiny portion in the culet, this could be enough to give the stone a uniform green tint. As a result, the green tint in these diamonds is usually extremely modest.

The hue of most green diamonds is influenced by tints of yellow, blue, or grey. Therefore, color, tone, and saturation changes can significantly impact the gem’s selling price. Green Lab-Grown Colored Diamonds are also real and can be consistent throughout the cut and layer. They are an amazingly affordable option for the very rare mined green diamond.

How Much is Jennifer Lopez’s New Diamond Ring Worth?

While Jennifer Lopez has unveiled her most valuable diamond engagement ring to date, the actress-singer-engagement entrepreneur’s latest engagement ring from reignited lover Ben Affleck was announced recently with Lopez delivering a video announcement through her newsletter.

In the video, she wore a substantial green diamond on a platinum or white gold band, bordered by two white diamond side stones, believed to weigh approximately 8.5 carats.

According to rumors, this stunning green diamond engagement ring is worth over 8.5 million dollars.

What Makes the Ring So Special?

According to reports, the engagement ring, particularly its color, is significant to the “On the Floor” singer. According to an article in InStyle, the diamond’s color is unusual and has sentimental meaning. “I always think the color green is my fortunate color,” Lopez stated in a recent piece in her “On the Jlo” newsletter. Perhaps you recall a particular green gown?” She referred to the Versace gown she wore to the Grammys in 2000.

Colored diamonds have a unique appeal, and the rare natural color of green diamonds may be the most enticing of them. However, a diamond’s green color is the consequence of radiation exposure. J Lo’s green engagement ring is truly one in a million!